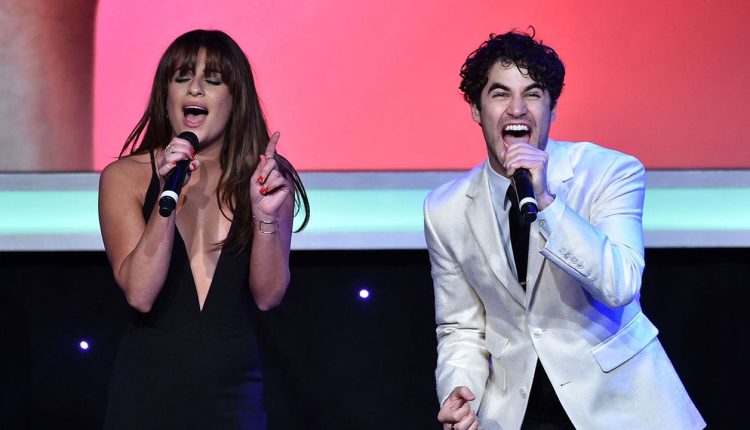 Darren Criss watched his friend and former “Glee” co-star sing “Don’t Rain on My Parade,” this time not as Rachel Berry, but as Fanny Brice.

In the hit Fox show, Michele played Berry, who was an aspiring Broadway performer. On various occasions throughout the duration the show, Michele belts out one of musical’s signature songs, “Don’t Rain on My Parade.”

In a truly full circle moment, a fictional story became reality when Michele took over as Fanny Brice, a role famously held by Barbra Streisand and later Beanie Feldstein and her “Glee” co-star was quick to show support.

Darren Criss showed support for his former “Glee” co-star by attending the Broadway production of “Funny Girl” where she recently took over the role of Fanny Brice.
(Bruce Glikas/WireImage)

Michele posted a picture to her Instagram of Criss, along with his wife Mia in attendance at the show.

“The amount of times this guy has heard me sing Don’t Rain on My Parade,” Michele captioned the post. “I love you @darrencriss and @miavoncriss.”

Michele and Criss have both performed on Broadway through their careers. Michele played Young Cosette in “Les Misérables” back in 1995 and also took the stage in “Ragtime,” “Fiddler on the Roof” and “Spring Awakening.”

Lea Michele and Darren Criss have both performed on Broadway though their careers.
(Kevin Winter/Getty Images for Family Equality Council)

Criss performed on Broadway in 2011 in the play “How to Succeed in Business Without Really Trying.” He has also performed in “Hedwig and the Angry Inch” and “American Buffalo.”

Michele and Criss worked together on the show “Glee,” which ran for six seasons starting in 2009. Another one of Michele’s “Glee” co-stars Jonathan Groff also showed support for his friend during the show’s opening night. Glee producer Ryan Murphy was also in attendance at the show.

Ashlyn Messier is a writer for Fox News Digital.