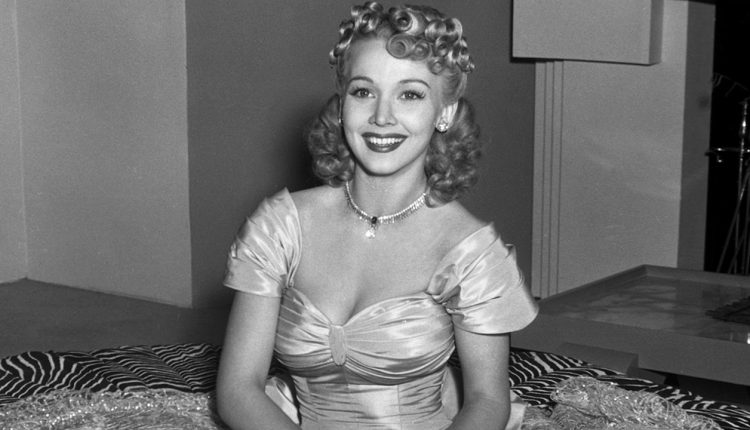 Carole Landis, a Hollywood star who met a tragic end, has been seemingly forgotten with time, but now Christian Blauvelt is determined to keep her legacy alive.

The award-winning author recently wrote a book in partnership with Turner Classic Movies (TCM), “Hollywood Victory,” which explores how the stars from the golden era of filmmaking supported American troops during World War II.

While Blauvelt explores the accomplishments of Bob Hope, Marlene Dietrich, James Stewart and Clark Gable — just to name a few — he also shines a light on Landis, who died nearly 74 years ago on July 5, 1948, at age 29.

“There’s so many unsung stars who really, I think, deserve more attention for their work during this time,” Blauvelt told Fox News Digital. “She’s not well-known today, but Carole Landis, along with a few other actresses, went together and logged more miles traveling around the world, entertaining our troops on the front lines, than anyone.

American actress and singer Carole Landis (1919-1948) is one of many classic stars featured in the book “Hollywood Victory.”
(Silver Screen Collection/Getty Images)

“Despite her accomplishments, barely anyone knows who Carole Landis is today, which is really a shame,” Blauvelt added. “This is a star who traveled tens of thousands of miles to visit our troops, give them a good time and just make them feel good about themselves during such a time of uncertainty and great misery ahead. She embodied a real sense of unity.”

According to TCM, the Wisconsin-born actress appeared in several small roles before she skyrocketed to fame with the 1940 prehistoric fantasy “One Million B.C.” She went on to star in films like 1941’s “Topper Returns” and “I Wake Up Screaming,” as well as 1945’s “Having Wonderful Crime.”

In 1942, Landis became heavily involved with the USO. She also wrote a book about her experience, “Four Jills in a Jeep,” which was acquired by 20th Century Fox and turned into a movie in 1944. It starred Landis’ real-life touring buddies — Martha Raye, Kaye Francis and Mitzi Mayfair.

“It was such a unique thing for an actress to write a book about her experience entertaining the troops,” Blauvelt noted. “It was such a unique path in terms of a woman taking such a stand, leveraging her glamour for a good cause. It sounds like something that would naturally happen today, but back then it wasn’t as common.”

Blauvelt described the blonde pinup as the “female equivalent of Bob Hope.” In 1943, she performed in Britain and North Africa, followed by the South Pacific in 1944. The initiative that Landis took, he said, went beyond what was expected of any female star.

“It was astonishing to learn how you can leverage celebrity into something really meaningful,” Blauvelt explained. “That’s something we don’t see all the time. And I don’t think we’ve seen it quite as powerfully as it was expressed during World War II … And there was a real understanding that the war effort transcended politics.

“You could be very left-wing, right-wing or somewhere in the middle,” he continued. “People still came together to face this common threat. Regardless of politics, people came together and realized that they needed to monetize their celebrity to raise money through war bonds, visit wounded servicemen and women, entertain the troops — whatever could be done to face the threat that wants to destroy our way of life completely, which was global fascism.”

It is said that Landis visited more than 250 military bases during the war. Not only did she participate in bond drives, she also supported organizations that served the armed forces. Despite suffering health setbacks involving amoebic dysentery, malaria and pneumonia during her USO duties in the South Pacific, Landis found her involvement in supporting the troops personally fulfilling, TCM noted. She served coffee and befriended servicemen at the Hollywood Canteen, where they could enjoy a hot meal and dance with their favorite stars free of charge.

Landis, who was nicknamed “Pride of the Yanks” by the press and “The Blonde Bomber” by soldiers, was said to kept busy with the Red Cross, the Naval Aid Auxiliary and Bundles for Bluejackets. She taught first aid and donated blood during her spare time. She reportedly danced with 200 soldiers, invited them to her beach house on weekends and wrote hundreds of letters to their families.

Among Landis’ titles included Air Raid Warden, commander in the Aerial Nurses Corps and an honorary Colonel in the American Legion.

But the star’s life was cut short. Blauvelt said that those who know Landis today tend to remember her best for her tragic demise.

Landis, whose personal life was said to be plagued with problems, was found dead from an apparent suicide. According to multiple reports, Landis was heartbroken after she learned that actor Rex Harrison refused to leave his wife Lili Palmer for her. It was the actor who first found Landis at her home.

Blauvelt shared that his book aims to celebrate Landis’ life and accomplishments, along with those of her peers.

Heavyweight champion Joe Louis was honored as “a great fighter and a great American” at a dinner tendered to him by the Southern Conference for Human Welfare at the Waldorf Astoria Hotel in New York City Dec. 16, 1946. The champ is congratulated by Dr. Clark Foreman, left, president of the organization. Standing behind a giant scroll, inscribed with personal tributes from many celebrities, are Frank Sinatra, who acted as chairman and master of ceremonies at the dinner, and actress Carole Landis.
(Getty Images)

“I hope readers get the sense that real unity is possible,” he said. “Not just in Hollywood, but America as a whole. Hollywood is a place where there are so many different points of view and so many political affiliations that are often at odds with each other. And yet, here’s a time when they chose to come together. Why can’t we have that again? The unity that was in Hollywood at the time was representative of America as a whole. It showed that if the movie industry could come together, the rest of America could too.

“I hope that at this time when it seems like we are so divided, this little glimpse of unity that we had in the past, shared by people like Landis, can inspire us to reach for that again.”