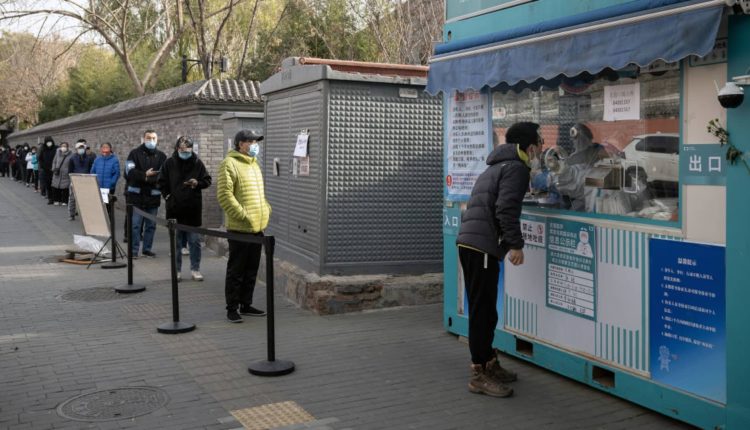 Residents queue at a Covid-19 testing booth in Beijing, China, on Monday, Nov. 28, 2022. The capital city has required regular virus tests for more than half a year.

Trending on Weibo, China’s version of Twitter, on Tuesday morning was the hashtag: “If virus testing chaos never stops, the pandemic may never end,” according to CNBC’s translation of the Chinese.

The hashtag was referring to the headline of a now-deleted opinion piece from a publication overseen by People’s Daily, the Chinese Communist Party’s newspaper. The article listed several instances of allegedly forged virus test results this year across the country, including in Shanghai and Beijing.

The article warned that false reporting of nucleic acid test results could end up spreading the virus further, lead to even more rounds of testing — and lockdowns for months on end.

That same media outlet on Monday published an article, still online, about more than 30 virus testing companies in China all controlled by the same shareholder — which has been repeatedly fined.

Last week, Lanzhou city health authorities blamed one of those companies for reporting some positive virus test results as negative.

It’s not clear to what extent there may be fraud, or whether the sheer volume of tests made it difficult to process them accurately.

In the U.S., a surge of pop-up virus testing stations raised concerns of fraud as well as identity theft.

On Tuesday, a Chinese official said at a press conference the cities of Beijing, Hefei and Shijiazhuang, among others, found problems with some virus testing firms and punished them. Criminal investigations into some institutions and individuals have also been made, the official added.

Over the last month, several large cities across mainland China reported a surge in infections, prompting renewed lockdowns. Students and groups of people held public demonstrations over the weekend to protest the Covid controls, a policy which has persisted for nearly three years.

Restrictions grew tighter this year as authorities sought to track and contain the more contagious Omicron variant. The capital city of Beijing, Shanghai and many parts of the country have mandated regular virus testing for months — to travel or enter public venues such as a supermarket.

CNBC selected 15 publicly listed Chinese Covid testing companies and found that they reported a total revenue of 86.58 billion yuan ($12.2 billion) in the first three quarters of the year, according to data from Wind Information.

Not all their revenue necessarily comes from testing. But their business saw big gains this year through the end of September.

Seven of the companies reported revenue nearly doubled or more during that time from a year ago — one even saw revenue nearly quadruple, the data showed. Three of those companies had listed on the mainland market since the pandemic began in early 2020.

In the first half of the year, 237 virus testing-related businesses registered in China — up by 51.9% from a year ago, according to Qichacha, a Chinese business database.

Testing just a 15-minute walk away

Until earlier this year, virus testing was primarily conducted by hospitals and negative results were not needed to enter public venues in certain cities.

But after the Shanghai lockdown in early April, many cities including Beijing began to set up more neighborhood kiosks for PCR virus testing — polymerase chain reaction tests which are highly accurate and fairly simple to process.

At least in Beijing, the stations frequently display the logos of companies handling the testing, with no upfront fee for people getting tested.

In May, the central government promoted the idea that in large cities, a Covid testing station should be within 15 minutes’ walking distance. Beijing city reiterated those plans on Wednesday.

As China navigates a path toward reopening, state media have put more emphasis on local adherence to the latest version of the health authority’s Covid policy and subsequent measures released in November. Neither stipulates whether or how virus testing stations should be deployed.