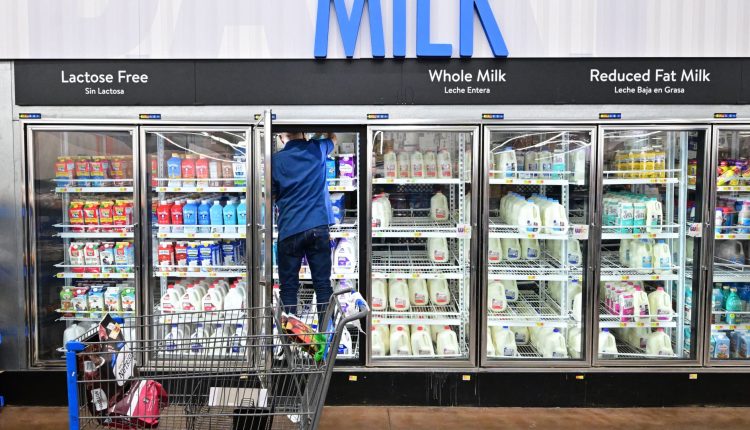 A man climbs into the fridge for milk at a Walmart store in Rosemead, California on November 22, 2022.

Inflation rose in October about in line with estimates, sending a sign that price increases at least are stabilizing, the Commerce Department reported Thursday.

The core personal consumption expenditures price index, a gauge that excludes food and energy and is favored by the Federal Reserve, rose 0.2% for the month and was up 5% from a year ago. The monthly increase was below the 0.3% Dow Jones estimate, while the annual gain was in line.

The gains also represent deceleration from September, which saw a monthly increase of 0.5% and an annual gain of 5.2%.

Including food and energy, headline PCE was up 0.3% on the month and 6% on an annual basis. The monthly increase was the same as September, while the annual gain was a step down from the 6.3% pace.

The department also reported that personal income jumped 0.7% for the month, well ahead of the 0.4% estimate, and spending rose 0.8%, as expected.

While the Fed takes in a broad range of measures to gauge inflation, it prefers the PCE index as it takes into account changes in consumer behavior such as substituting less expensive goods for pricier items. That’s different than the consumer price index, which is a raw measure of changes in prices.

Policymakers view core inflation as a more reliable measure as food and energy prices tend to fluctuate more than other items.

In other economic news Thursday, the Labor Department reported that weekly jobless claims totaled 225,000, a decline of 16,000 from the previous week and below the 235,000 estimate.

U.S. GDP rose 2.9% in the fourth quarter, more than expected even as recession fears…

Wholesale prices fell 0.5% in December, much more than expected

As China reopens and data surprises, economists are starting to get less gloomy