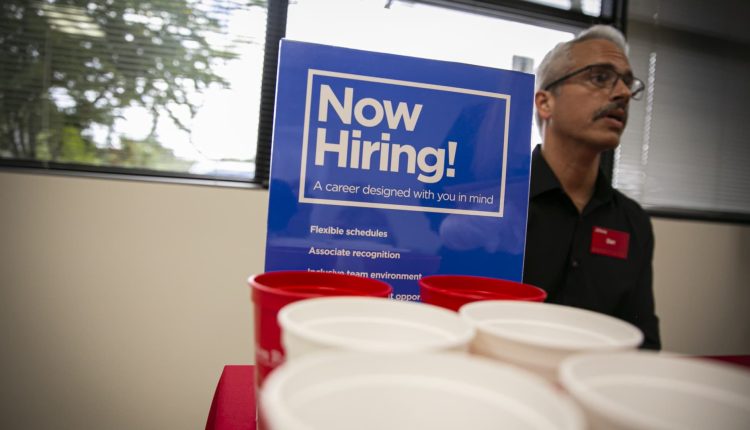 A “Now Hiring” sign is displayed during a job fair for Hispanic professionals in Miami, Florida.

The unemployment rate among Hispanic workers dropped sharply in September, but that could be due to fewer eligible adults looking for a job.

Hispanic workers saw their unemployment rate fall to 3.8% from 4.5% in August. Broken down by gender, unemployment declined to 3.2% among Hispanic males over 20 years old and 3.6% among females.

The decline is much bigger than the one seen at the country level. The government said the overall jobless rate fell to 3.5% from 3.7% in August, its lowest level since July. A total of 263,000 jobs were created last month, less than a Dow Jones forecast of 275,000.

“That decline from 4.5% in August to 3.8%, while really significant, has to be tempered by the fact that clearly, Latinx workers withdrew from the workforce,” said Michelle Holder, a distinguished senior fellow at Washington Center for Equitable Growth. Many Hispanic workers do seek employment in some areas of the market heavily affected by Federal Reserve interest rate hikes, she added.

While Hispanic workers saw the biggest declines on a month-to-month basis, she noted that Black women have still seen the sharpest decline in labor force participation since the start of the pandemic.

While the decline in participation is a reason for concern, areas of the labor market where Hispanic workers are overrepresented did experience significant gains in September, noted William Spriggs, chief economist of the AFL-CIO. Those sectors included leisure and hospitality and construction where payrolls were up 83,000 and 19,000, respectively.

But those numbers don’t come without their downsides, he said.

“This is disturbing because it means Hispanic workers are finding great difficulty moving out of their pockets and the big story of this recovery has been the success of women and Black workers to move out of the trap of just being in low-wage industries,” he said.

“The good news for Black workers is in many ways wiped out for Hispanic workers,” he said.

To be sure, Valerie Wilson, director of the Economic Policy Institute’s program on race, ethnicity and the economy, said individuals should hold off on drawing firm conclusions from one month of data.

Fluctuations are common in monthly reports and require several consecutive periods of a similar move before one can deduce a trend.