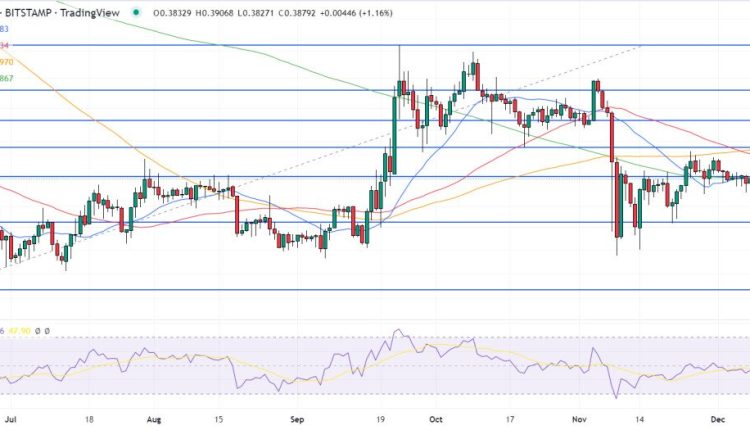 XRP, the native cryptocurrency that powers Ripple’s global blockchain-based payments system, has jumped around 4.0% from the monthly lows it printed on Wednesday under $0.3750. The cryptocurrency was last changing hands just below $0.39 per token on Thursday, up about 1.3% on the day and 1.2% in the last 24 hours, according to CoinMarketCap. However, near-term price predictions remain fairly neutral.

For now, XRP’s 21 and 200-Day Moving Averages and the 61.8% Fib retracement from the September highs above $0.55 back to the early summer annual lows under $0.29 are all acting as a magnet for the price action. According to the 14-day Relative Strength Index (RSI), which was last around 46.5, XRP’s is fairly priced at the moment with markets likely evenly positioned. That implies plenty of room for bullish or bearish momentum to come in before any discussion of conditions becoming overbought or oversold begin.

Price Prediction – Where Next For XRP?

XRP appears to be at a crossroads. It looks to be around the middle of both short ($0.37-42) and longer-term ($0.31-55) ranges. The $0.42 area is a formidable area of resistance – it has consistently acted as both resistance and support since late July and is where the 100 and 50DMAs reside. It will probably be a struggle to get back above this week, even if Friday’s US inflation data surprises to the downside and lifts macro sentiment.

A steady crawl lower to $0.31 support, which is roughly where the post-FTX collapse lows are, could be on the cards if US equities continue pulling back from highs. But with the US dollar in a clear weakening trend right now, it is difficult to bet on a big further crypto price decline, unless something happens to reverse its weakness (continued global recession fears?).

XRP might well remain stuck within recent ranges until things become clearer as to how the Ripple vs US SEC case is going to shake out next year.

Cryptocurrency users based in the UK and France will soon be provided with an easy fiat-to-XRP on-ramp via the XRP-focused Xumm wallet. The wallet recently launched a similar on-ramp in the Netherlands.

Xumm teamed up with BTCDirect and BanxaOfficial to offer the product and says it will add more countries to the on/off ramp over time and that more third-party providers will also soon be integrated. Xumm adds that it will also soon integrate with GateHub for its stablecoins.

These include trading signals, social sentiment and on-chain indicators, a pre-sale token scoring system, a token listing alert system and a strategy back-testing tool. Dash 2 Trade’s ecosystem will be powered by the D2T token, which users will need to buy and hold in order to access the platform’s features.

Dash 2 Trade is currently conducting a token pre-sale at highly discounted rates. D2T token sales recently surpassed $9.055 million. The sale has now entered its fourth and final phase and sales are still going strong, with $400K coming in in the last 24 hours. The pre-sale dashboard is going to be released soon, with the development team currently running ahead of schedule. Tokens are currently selling for $0.0533 each, which observers are calling highly discounted.

Dash 2 Trade was recently listed as the third-best presale token of 2022 by CoinCodex.

Amid the growth in popularity in recent years of environmentally and socially friendly investments, investors looking for a green cryptocurrency should consider the IMPT token. IMPT.io has partnered with thousands of the world’s largest retailers to help offset their carbon footprints and allows users to trade carbon credits on the blockchain.

IMPT tokens are currently in their second stage of the presale with IMPT having raised over $15.6 million. That amounts to $1 million in token sales in just the last 24 hours. Investors only have another three days to purchase tokens at the current discounted price of $0.023. IMPT token exchange listings begin in a few days.

IMPT was recently listed as the best presale token of 2022 by CoinCodex.

Major blockchain-based games like Axie Infinity lost significant traction in 2022. As a result, many investors interested in the crypto gaming space are looking for alternative avenues. Calvaria, an up-and-coming play-to-earn battle card crypto game, could be a good alternative. Calvaria seeks to boost crypto adoption by creating a bridge between the real world and crypto, a fun and accessible crypto game.

Investors should consider Calvaria’s RIA token pre-sale. Calvaria has now raised $2.36 million, with a crypto whale scooping up $97.5K in one purchase on Thursday. The presale is in the final stage, with only 24% of tokens left.