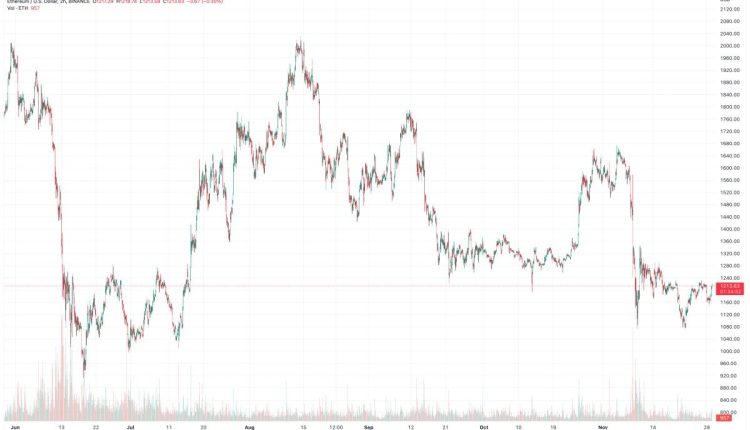 The Ethereum price has risen by 3.5% in the past 24 hours, reaching $1,215 amid a 2% rise for the cryptocurrency market as a whole. Its current level also represents a 9% jump in the last seven days, with this rise following comments by Ethereum co-founder – and Cardano founder – Charles Hoskinson, who recently predicted that Elon Musk’s takeover of Twitter would result in significant cryptocurrency adoption.

Specifically, Hoskinson predicted at the Web Summit 2022 conference that Musk’s Twitter takeover would add 200 million users to the cryptocurrency ecosystem. So with Ethereum remaining the biggest layer-one blockchain in terms of value locked in, it and its native token are arguably best placed to benefit from such a growth in adoption.

Ethereum’s chart shows that it’s beginning to swing upwards again after a big drop earlier in the month (caused by the FTX collapse). Its relative strength index (purple) is on track to reach 50, indicating growing momentum that could continue, assuming no aftereffects or contagion events related to FTX’s downfall.

ETH’s 30-day moving average (red) continues to sink below its 200-day average, suggesting that it hasn’t quite finished bottoming. Still, on a purely technical basis, it’s due for a nice rebound in the coming days and/or weeks.

Looking at the bigger picture, there are various reasons to be optimistic about ETH. For one, Ethereum famously completed its long-awaited Merge in September, turning it into a proof-of-stake system and putting it on track to introduce further scalability improvements.

More recently, Cardano founder (and Ethereum co-founder) Charles Hoskinson made comments this past week which provide support for the (widespread) perception that Elon Musk’s takeover of Twitter will be a big boost for crypto. Speaking at the Web Summit 2022 conference in Lisbon, he had the following to say:

“Elon [Musk] buying Twitter is probably going to bring crypto to 200 million people there. He has every intention of some form of crypto integration.”

While Hoskinson focused largely on Dogecoin with regards to Twitter (while noting that Dogecoin will struggle to scale to 200 million users), he also suggested that the ecosystem as a whole will benefit from Musk’s acquisition. And even though Hoskinson (for obvious reasons) didn’t single out Ethereum as a prime beneficiary, Ethereum’s position as the biggest layer-one blockchain arguably implies that it could gain more than most.

Looking at Ethereum’s total value locked in, it currently accounts for 57.9% of the entire DeFi ecosystem, compared to 11.9% for its nearest rival, BNB Chain (aka Binance Smart Chain). It has this dominance despite the fact that it has yet to fully capitalize on the Merge, in that many of its planned scalability improvements – most notably sharding – have yet to be implemented.

As such, there’s a credible school of thought that suggests that Ethereum’s dominance will only rise over the longer term, with the platform taking advantage of its first-mover position to strengthen its position.

If accurate, this would mean that ETH can only rise in the medium and long-term, particularly as recent updates have made it deflationary.

Accordingly, ETH could be looking to return to previously attained levels during the first half of next year, with $2,000 being a realistic intermediate target. In the longer term, it should potentially pass its current ATH of $4,878, assuming a new bull market at some point in the more distant future.

However, Hoskinson also suggested that Twitter may end up using BNB Chain, since Binance invested $500 million in Musk’s acquisition of the platform. If this is the case, then ETH’s position may end up being undermined.

Either way, investors may be waiting some time for ETH to witness really big returns. This may lead some to look elsewhere, with presale coins presenting some of the best opportunities for sizeable gains this year, even during a bear market.

For instance, metaverse-based meme token Tamadoge (TAMA) posted very impressive gains after listing on OKX in October, rising as high as 1,800% at one point compared to its presale price. While the three coins below may not guarantee similar returns, they each boast solid fundamentals, so have every chance of earning their early investors a nice profit once they list.

Running on Ethereum, Dash 2 Trade is a trading intelligence platform that provides investors with real-time analytics and social trading data, all of which can help them arrive at informed trading decisions.

The sale of its native D2T token has raised over $7 million. It has also announced listings on BitMart and LBANK Exchange for early 2023, confirming that investors will indeed have the opportunity to enjoy some returns soon enough.

Also based on the Ethereum blockchain, RobotEra (TARO) is a Sandbox-style Metaverse platform due to go live by the end of Q1 2023. As a play-to-earn game that makes use of non-fungible toens, gamers will be able to play as robots and participate in creating its virtual world, including NFT-based land, buildings, and other in-game items.

1 TARO is currently selling for 0.020 USDT (it can be bought using either USDT or ETH), although this price will rise to $0.025 in the second stage of its presale, which will begin soon.

Yet another Ethereum platform, IMPT is a carbon-credit marketplace that will reward consumers for shopping with eco-friendly merchants, with the rewards coming in the form of its IMPT token that can be used to buy NFT-based carbon offsets. These offsets can then be traded or retired, whereby they will contribute to users’ IMPT.io scores, which tracks their impact on the Earth’s environment.

Since opening its sale in October, IMPT has raised just over $13 million, with 1 IMPT currently being sold $0.023.

California DMV to Use Blockchain Technology for Record Keeping