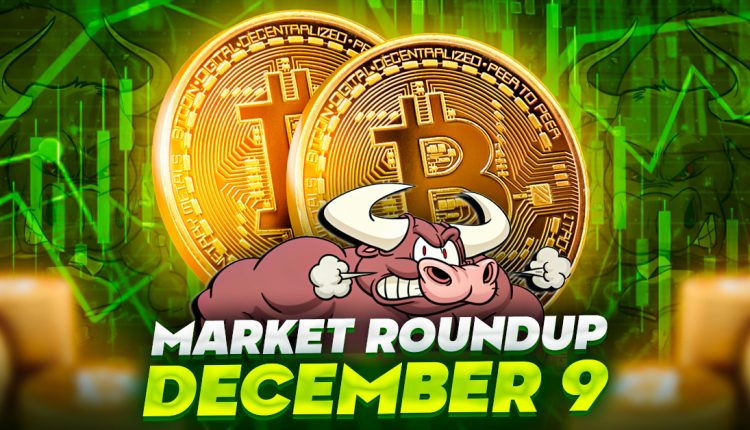 The upward channel triggered a rebound in Bitcoin price above the $16,740 level on December 09, and it is now trading above the $17,200 level. Similarly, Ethereum has risen above the $1,280 level ahead of the US PPI figures, which are regarded as the most important economic event.

On December 9, major cryptocurrencies traded in the green, with the global crypto market capitalization rising 2.42% to $859.97 billion in the previous day. Over the last 24 hours, overall crypto market volume grew 1.75% to $37.47 billion.

Let’s take a look at the top 24-hour altcoin gainers and losers.

The US Producer Price Index (PPI) figures will continue to be in the spotlight, as the Bureau of Labor Statistics will release them at 13:30 GMT. Annual producer price inflation in the United States fell for the fourth consecutive month in October 2022, to 8%, the lowest level since July of last year, from 8.4% in September.

Also, investors will be paying close attention to the US FOMC and CPI numbers to figure out how the financial markets will move in the future.

Stronger figures typically drive a bearish trend in the US dollar, while making Bitcoin and other dollar-denominated crypto pairs bullish. As a result, it’s critical to keep an eye on US-related economic fundamentals.

Another important factor that could help the cryptocurrency limit further losses is a positive report indicating that the financial services behemoth PayPal intends to launch cryptocurrency services in Luxembourg.

PayPal, a major financial services provider, intends to launch cryptocurrency services in Luxembourg in an effort to promote the use of cryptocurrencies throughout the European Union.

PayPal customers in Luxembourg will be able to buy, sell, and keep cryptocurrencies such as Bitcoin and Ethereum.

According to a press release issued by PayPal on December 7, the launch of cryptocurrency services in Luxembourg is expected soon.

Customers in Luxembourg can now access the cryptocurrency market via a secure and reliable platform. It should also be noted that the upcoming company will make instructional materials and frequently asked questions available so that customers can better understand the benefits and drawbacks of cryptocurrency.

Bitcoin’s current price is $17,218, and the 24-hour trading volume is $20 billion. The BTC/USD pair has gained nearly 2% in the last 24 hours, while CoinMarketCap currently ranks first with a live market cap of $361 billion, up from $323 billion yesterday.

Following its breakout above the $16,750 level, the BTC/USD pair is trading with a bullish bias on Friday. Bitcoin has formed an upward channel on the 4-hour timeframe, which is supporting the bullish trend; therefore, BTC may face resistance near the $17,400 level.

The current price of Ethereum is $1,280, with a $6 billion 24-hour trading volume. Ethereum has gained nearly 4% in the last 24 hours, and CoinMarketCap currently ranks second, with a live market cap of $156 billion.

On the upside, ETH’s immediate resistance remains at $1,300, and a break above this level could expose ETH to $1,340.

IMPT is a new Ethereum-based network that rewards users for doing business with environmentally conscious businesses. Since its initial public offering in October, IMPT has raised more than $16.5 million, with 1 IMPT currently trading at $0.023.

Due to its extraordinary success, IMPT.io, a groundbreaking platform for carbon offsetting and carbon credits trading, will end its token presale on December 11th.